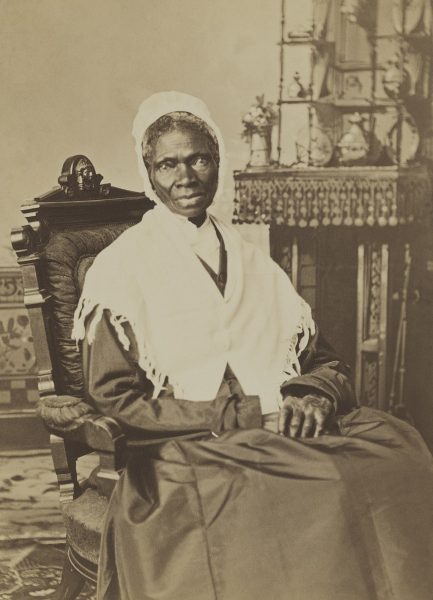 Sojourner Truth’s given name was Isabella Van Wagenen, and she was born into slavery in Ulster County, New York, in 1797. Her early religious influences came from her mother who taught her about morality and Protestantism. Her mother also spoke of African spirituality and taught Truth how to talk with God. Through this, Truth formed an intimate relationship with the heavens which became the basis of her spirituality. She believed she was encouraged by God to escape slavery in 1826 shortly before all adult slaves in New York were set to be freed.

Truth’s five-year-old son Peter, who should have been freed in New York upon reaching adulthood, was illegally sold to a plantation in the South. Truth rallied the support of local Quakers and was able to find and retrieve her son who had been abused during this time. As a result, she asked God to curse Peter’s abductors. After hearing a horrible event had befallen the perpetrators, Truth was convinced she had God’s favor. She returned to Ulster County and attended some Methodist services. Crucially, Truth sought to come to her own understanding of the Bible. Being African-Dutch, she was illiterate and still learning to speak English. She would have children read her the Bible because, unlike many adults, they were willing to do so without their own comment. Children also did not mind reading the same passage over many times. With this help, Truth was able to form her own religious interpretations.

Truth soon moved to New York City where she continued to absorb religious influences like the Presbyterian teachings of Charles Grandison Finney and the services of Zion’s African Methodist Episcopal Church. She began preaching on a small scale in New York’s most disreputable and low-down districts to save women from prostitution and other fates. It was hard work that no self-respecting middle-class Black women would want to be seen coming into contact with. In 1843, Truth had a vision in the night that compelled her to change her name from Isabella Van Wagenen to Sojourner Truth and leave New York to start preaching across the country. Leaving was an act of faith that redefined her existence.

“After fifteen years in the city, her epiphany came as a vision and a voice. One night she went to bed as Isabella and awoke the next morning as Sojourner.”

Quote from “Going ‘Where They Dare Not Follow’: Race, Religion, and Sojourner Truth’s Early Interracial Reform,” a published essay by Margaret Washington.

“My name was Isabella: but when I left the house of bondage, I left everything behind. I wa’n’t goin to keep nothin’ of Egypt on me, an ‘so I went to the Lord an ‘ asked him to give me a new name. And the Lord gave me Sojourner, because I was to travel up an’ down the land, showin’ the people their sins an’ bein ‘ a sign unto them. Afterwards I told the Lord I wanted another name, ’cause everybody else had two names; and the Lord gave Truth, because I was to declare the truth to the people”

Quote from Sojourner Truth from Glorying in Tribulation: The Lifework of Sojourner Truth by Erlene Stetson and Linda David, found in “Sojourner Truth: Bringing Order Out of Chaos,” a published article by Miriam Ma’at-Ka-Re Mon Ges.

Truth, above all else, preached from her religious experience and personal connection to God because of the ways the Bible was used by Christian slaveholders to justify oppression. At first, she spoke to people already assembled as she traveled across the nation. Before long, though, Truth was organizing and advertising her own meetings to preach on personal spiritual empowerment, abolition, and women’s rights. Overall, Truth’s love for God was a main motivator behind her work. Her religious experience inspired her and gave her the tools to argue for abolition.

Truth is born into slavery in Rifton, New York.