Step 3. Learn About the Men in the Portraits 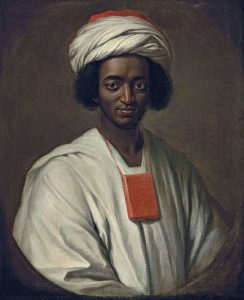 In this 1734 portrait, you see a man by the name of Ayuba Suleiman Diallo. He became known as Job ben Solomon in America. He was about 32 years old at the time of the portrait. He sat for this oil painting in England after he was freed from slavery in America and was on his way home to Guinea, in the northwestern region of Africa. The artist, William Hoare, was one of the most famous portraitists of his time. This work of art is the first known English portrait to portray a Black man.

Ayuba was born in 1701 to an influential Muslim family. He attended a distinguished school and by the time he was a teenager, he was able to recite the entire Quran from memory. This is the holy text of Islam.

Tragically, Ayuba was captured and sold as a slave when he was away from home on a trading journey. He was taken to a slave ship where he convinced the captain to let him write to his father. However, mail was slow and the ship sailed for America before his father could rescue him. When he arrived in America, a Maryland planter purchased him and put him to work in tobacco fields. Ayuba would regularly retreat to the woods to pray. During his prayers, a neighbor boy would mock him, insult him, and throw mud at him. He attempted to escape his captors but was captured and imprisoned in Pennsylvania.

Ayuba spoke no English, but he could read and write Arabic. A local man by the name of Thomas Bluett interviewed him, and through hand signals, it became clear that Ayuba was a Muslim. Though he was returned to his master, Ayuba was allowed to write a letter intended for his father in Guinea. The letter was passed from person to person until it came to a nobleman in England by the name of James Oglethorpe who founded the colony of Georgia. Oglethorpe was sympathetic to Ayuba’s plight and sent money to purchase his freedom. Once freed, Ayuba traveled to England with Thomas Bluett and spent the voyage learning English. By the time he arrived in England, he was able to understand and communicate in basic ways. During his time in England, he became a popular guest among the nobility. He was even invited to meet the king and queen! It was at this same time that Ayuba sat for his portrait. While he was in England, he also recorded two copies of the Quran. Books like these were rare in England at that time and these copies became valuable to scholars.

Ayuba eventually returned to his home in Guinea and remained friendly with the British for the rest of his days. His friend, Thomas Bluett, wrote his biography, which was published in London. He died in 1773. 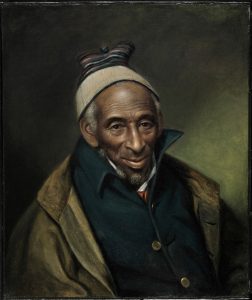 In this 1819 portrait, you see Yarrow Mamout, a former slave who was able to purchase his freedom and buy his own home in Georgetown, Washington, D.C.. The famous portrait artist of the American Revolution, Charles Willson Peale, painted this portrait for display in his Philadelphia Museum. It is a rare representation of ethnic and religious diversity in early America. Yarrow’s knit cap is likely a kufi, a hat traditionally worn by African Muslim men to express their religion.

Yarrow Mamout was born in 1736 in the West African country of Guinea. He learned to read and write Arabic, like many Muslim boys. He was captured when he was 16 years old, along with his sister, Hannah.  They were both taken to Maryland and Yarrow was purchased by the Beall family. Yarrow was permitted to make and save his own money. Allowing this was rare among slave owners. After 44 years of servitude, he was able to purchase his own freedom. He continued to work and save and in 1800 purchased his own home in Georgetown. In this home, neighbors reported seeing him pray in his garden. He also purchased stock in the Columbia Bank of Georgetown. He was also able to purchase the freedom of his son, Aquilla who went on to marry a freed slave woman by the name of Mary. The town where they settled was eventually named Yarrowsburg after them.

This is an image of Omar ibn Said who was a Muslim man enslaved in America. The image, known as an Ambrotype, which is an early form of photography. The glass made Ambrotypes quite fragile, so this image of Omar is very rare and valuable.

Omar was born in 1770 in a region called Futa Toro in West Africa and was likely captured during a military conflict at the age of 37. He was transported to America where he was purchased by rice planters in Charleston, South Carolina. After two years of hard labor and mistreatment, he escaped and made his way to Fayetteville, North Carolina where he was captured and put in jail. From there he was sold again to James Owen whose brother later became governor.

Omar’s family was wealthy, so before his enslavement, he had the opportunity to learn mathematics, business, astronomy, and theology. He also could read and write Arabic. He gained some popularity in the Fayetteville area for his ability to write in Arabic. The Owen family were so impressed with his reading and writing abilities that they gave him an English translation of the Bible. He was befriended by Francis Scott Key, the man who wrote the Star Spangled Banner, who gave him an Arabic translation of the Bible.

He was converted to Christianity in 1820, it seems because of the influence of the Owen family who were devoted Presbyterians. It is clear, though, that he continued many of his Muslim traditions and beliefs. There are Muslim dedications written in his Bible, and he always wore the cap, similar to the one Yarrow Mamout wore, which was a representation of the Muslim turban. He is well known for writing fourteen manuscripts in Arabic, including his own autobiography, The Life of Omar ibn Said, which was written in 1831. This book is the only known Arabic autobiography written by a slave in America. He lived to be 94 years old and was still enslaved at the time of his death in 1864. 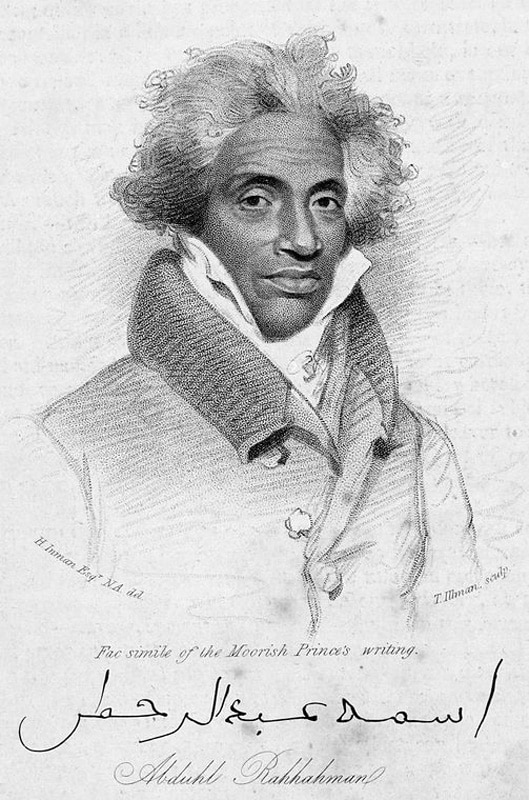 This is an engraving of Abdul Rahman made in 1828. Though you can’t tell by his clothing, Abdul was a Muslim who had been a slave in America for forty years and was eventually freed. He was able to raise money to travel back to Africa with his wife and two of his nine children. An engraving is like a drawing that is carved into a flat surface and can be used like a stamp to transfer the image onto a piece of paper. The artist, Thomas Illman, was a popular engraver in America at the time.

Abdul was born in 1762 and was a prince of the Fulbe people in the Futa Jalon region in West Africa. He learned to read and write and at 26, he became a colonel in his father’s army. He had some military successes, but in 1788 he and his army were ambushed, captured, and sold to a slave a ship.

Abdul ended up in Natchez, Mississippi where he worked his way to be the foreman on the plantation where he was enslaved. His ability to read and write as well as his military training made him a valuable asset on the plantation. He married an enslaved woman named Isabella who lived on the same plantation, and they had four daughters and five sons together. Remarkably, when he was out selling vegetables at a farmers market, he ran into an acquaintance from home. This Dr. Coates Cox had been traveling in Africa when he had fallen ill and Abdul and his father had nursed him back to health. Dr. Cox tried to purchase Abdul from his enslaver, but he refused the offer. Years later, Dr. Cox’s son launched a public campaign to free him. Twenty years after Abdul saw Dr. Cox in the market,, the request for freedom reached President John Quincy Adams and the Secretary of State, Henry Clay, who arranged for his release in 1828.

Though he was free, his wife and children were not. Abdul traveled to different abolitionist groups around Natchez raising money to buy their freedom. In the end, he was able to free his wife and two of his children and their families. They immigrated back to Africa, and, sadly, Abdul died shortly after their arrival there in 1829.

Prepare for a class discussion by making notes on your own paper.